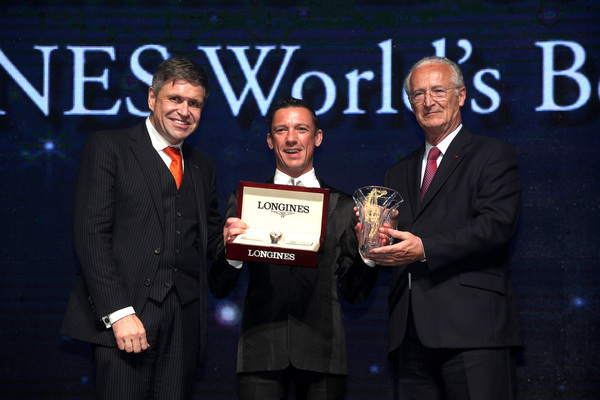 Frankie Dettori is presented with his award by Juan-Carlos Capelli (Longines) and Louis Romanet (IFHA)
Frankie Dettori officially succeeded Ryan Moore as the Longines Worlds Best Jockey during a gala dinner at the cavernous Hong Kong Covention and Exhibition Centre on Friday. Accepting the award, Dettori said: "It's about time someone did this and, although it's only the second year of the award, I'm getting a bit long in the tooth and don't have too many years left so it's great to win it."
The 45-year-old flew into town specially to collect the trophy and has no rides in the Hong Kong International Races on Sunday.
Dettori has enjoyed plenty of success at Sha Tin over the course of his career and has a full set of wins in the four main races, including three in the Hong Kong Cup.
Twice successful with horses trained by Saeed Bin Suroor (Fantastic Light in 2000 and Ramonti in 2007), Dettori was also aboard for the mighty Falbrav's career swansong 2003.
This week former Hong Kong-based David Hayes - who saddles Criterion in Sunday's big race - has been recalling his own part in the '03 Cup as trainer of third placed Elegant Fashion.
"Elegant Fashion was the Derby winner and she was terrific," says Hayes. "She really presented on the day but Falbrav was a superstar and he and Rakti were just a bit too big and a bit too strong on the day."
Falbrav arrived in Hong Kong having just missed out at Santa Anita behind the dead-heating High Chaparral and Johar one of the greatest races in the history of the Breeders' Cup.
Sent off the 5-4 favourite Falbrav "sprouted wings at the 150" in the words of the commentator, who concluded his call by urging viewers to "say goodbye to a superstar!"
Falbrav must rank very close to the top of the tree in the careers of both Dettori and Luca Cumani and he certainly went out in style.